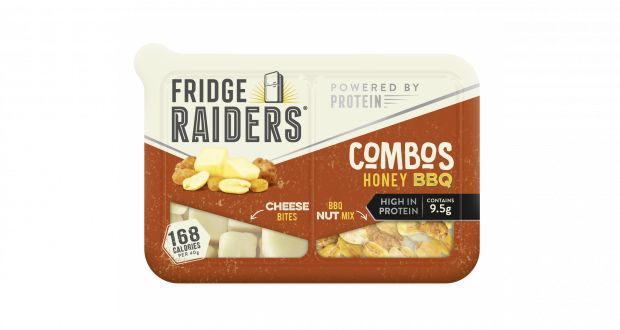 The Fridge Raiders Cheese and Nut Combos are High in Protein

Michael Hemsworth — March 28, 2019 — Lifestyle
References: kerrygroup & talkingretail
The Fridge Raiders Cheese and Nut Combos are set to be available this April as a new line of snack options for consumers that will support their preference for high-protein convenience foods.

The multi-packs will come in two flavor options including Honey BBQ and Sea Salt & Pepper, and will feature a savory mix of cheese bites along with a nut mix that contains just 170 calories or less. This will support the rising number of consumers seeking out premium foods that are conveniently prepackaged and ready to be taken with them wherever they go.

The launch of the new Fridge Raiders Cheese and Nut Combos was explained by Fridge Raiders Brand Manager at Kerry Foods Matthew Paterson who said, "The convenient format of these snacks means they can be consumed on-the-go or as a planned occasion to satisfy that hunger gap, which often strikes in-between meals. This launch follows a very strong reception from both consumers and retailers during research and we have also seen similar style snacks becoming increasingly popular in the US market, so we are confident this trend will translate within the UK space."
3.5
Score
Popularity
Activity
Freshness