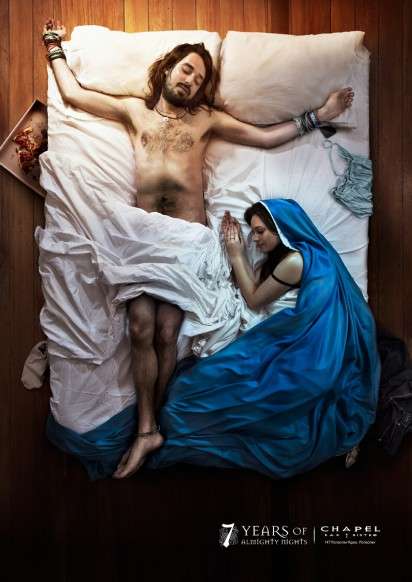 Meghan Young — October 26, 2012 — Lifestyle
References: ogilvy & ibelieveinadv
Share on Facebook Share on Twitter Share on LinkedIn Share on Pinterest
The Chapel Bar & Bistro ad campaign subtly refers to an awesome night out at this particular venue. Although it doesn't showcase the food, the drink or even the space itself, it alludes to its religious name in a way that will catch people's attention immediately--more so than any of the other things listed would, that's for sure.

Although the Chapel Bar & Bistro ad campaign might be considered controversial, with some rocker man posing as Jesus on the cross as his one night stand bows reverently like Mother Mary, the blanket strategically covering each one, it is also very creative. Celebrating "7 years of almighty nights," the campaign was created by the Ogilvy branch based in Auckland, New Zealand.
5.3
Score
Popularity
Activity
Freshness
Get the 2021 Trend Report FREE