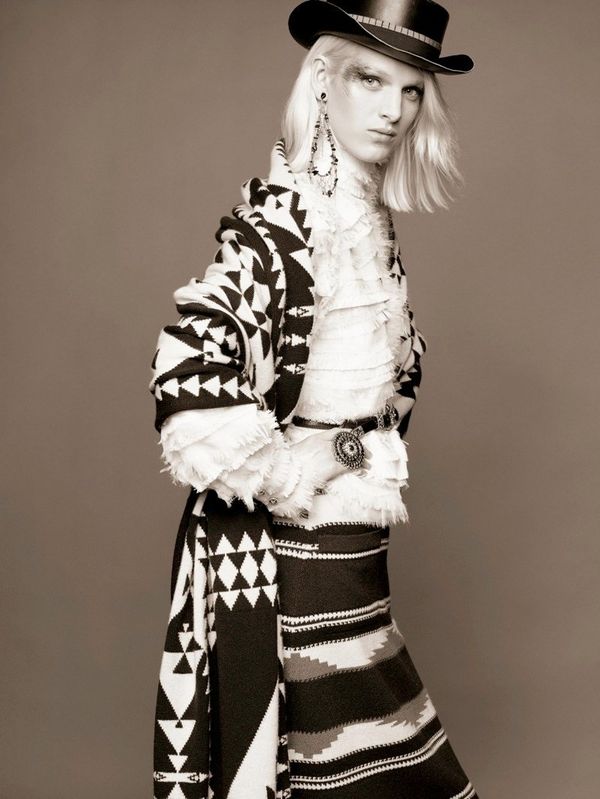 Meghan Young — December 20, 2013 — Fashion
References: chanel & fashiongonerogue
Share on Facebook Share on Twitter Share on LinkedIn Share on Pinterest
While many fashion labels are encouraging a sleek and edgy monochromatic transition season next year, the Chanel Pre-Fall 2014 collection ushers in a refreshing change of pace. Or better yet, trot. Inspired by gun-slinging cowboys, it adheres to a Western theme, if a modernized one at that. Feminine and flirty, the looks may not intimidate in the same way as traditional cowboy attire, but it still makes a statement.

Shot by Karl Lagerfeld and starring Ashleigh Good, the Chanel Pre-Fall 2014 collection was captured in studio in a vintage sepia tone. This filter doesn't take away from the rhinestone details and fur trimmings, however. It simply tones down the urban touches including some avant-garde makeup looks around the eyes and some experimental tailoring. Overall, the themed looks are fun and flirty.
4.9
Score
Popularity
Activity
Freshness
View Innovation Webinars