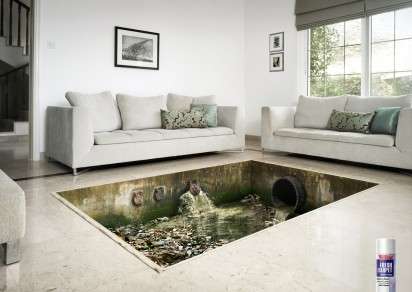 Meghan Young — April 22, 2012 — Marketing
References: grey & ibelieveinadv
Share on Facebook Share on Twitter Share on LinkedIn Share on Pinterest
It may be a repulsive thought, but sometimes rugs can end up smelling really bad after a while, which the Champion Sprayon Fresh Carpet ad campaign shows. Although slightly exaggerated, people could very well liken their dirty rug to a sheep pen or a sewage pit. Whatever it may remind them of, smelly carpets can really affect the atmosphere of a home.

Conceived and executed by Grey, an ad agency based in Dubai, United Arab Emirates, the Champion Sprayon Fresh Carpet ad campaign creatively depicts how disgusting certain smells can be. Creative directed by Alisdair Miller, the print ads were photographed by Graham Tooby. It is the illustrations done by Loupe Imaging that really adds context to the overall ad campaign. The contrast between the illustrations and their squeaky clean surroundings is intriguing.
3.4
Score
Popularity
Activity
Freshness
Get the 2021 Trend Report FREE