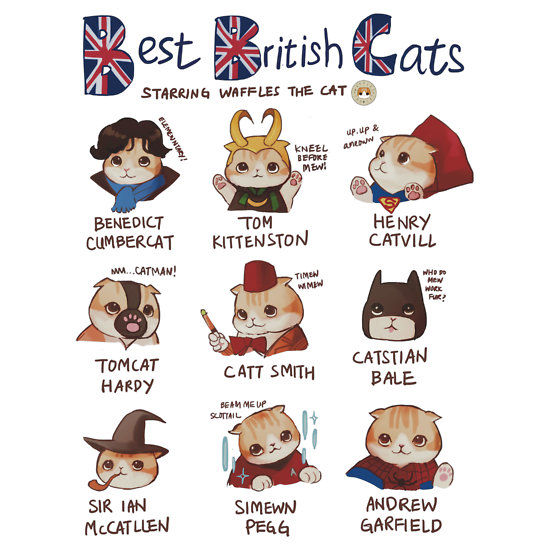 Angela Rajic — January 16, 2014 — Fashion
References: redbubble
Share on Facebook Share on Twitter Share on LinkedIn Share on Pinterest
Red Bubble has released a brand new cat shirt design. The Best British Cats (a pun on BBC, the British Broadcasting Corporation) is a shirt depicting cult favorite British actors as cats. This hilarious shirt has icons such as ‘Benedict Cumbercat’, a pun on actor Benedict Cumberbatch and his popular role as Sherlock Holmes. Tom Hiddleston, Doctor Who’s Matt Smith, Christian Bale and Tom Hardy are also given the cute cat treatment on this t-shirt.

This cat shirt is a great homage and love letter to British actors and television shows that have achieved popularity and success as well as cult followings. This is also a shout out to the ever growing female fandom many of the these shows, films and actors have. With loads of recognizable names and costumes, this cat shirt the perfect gift for any fangirl with a taste for British media.