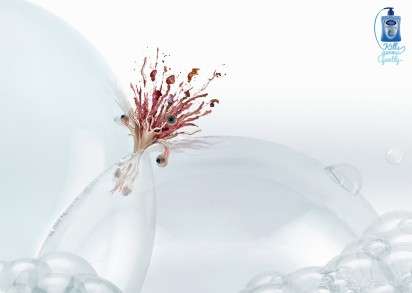 The Carex 2011 Ad Campaign is Direct and to the Point

Meghan Young — April 30, 2011 — Marketing
References: mccann & ibelieveinadv
Share on Facebook Share on Twitter Share on LinkedIn Share on Pinterest
The Carex 2011 ad campaign is pretty direct and to the point. Aside from smelling nice, feeling good and looking good (in regards to packaging), people are often most concerned with one thing when it comes to soap: Does it kill bacteria and germs? Yes, Carex soap does. By the looks of these simple yet funny ads, it does so in three ways by squeezing, crushing and cutting.

Conceived by Bangkok-based ad agency McCann Worldgroup, the Carex 2011 ad campaign was photographed and illustrated by Visionary, with creative direction by Supachai Toemtechatpong, art direction by Lerdpong Jaturontrasame and copywriting by Kittisak Prechapanich.

I especially like that the Carex 2011 ad campaign is as clean and pristine as the product itself.
3.6
Score
Popularity
Activity
Freshness
Jeremy Gutsche Keynote Speaker