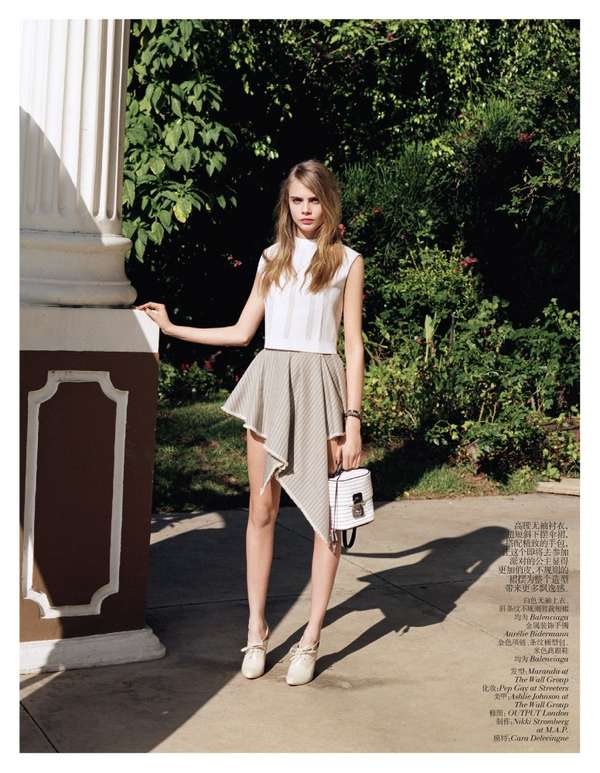 The Photoshoot Starring Cara Delevingne for Vogue China is Mod

Meghan Young — February 14, 2013 — Fashion
References: vogue.cn & fashiongonerogue
Share on Facebook Share on Twitter Share on LinkedIn Share on Pinterest
Clad in mod outfits that are at once youthful and sophisticated, model Cara Delevingne for Vogue China puts on a rather moody face. The sunny day doesn't seem to help, she stubbornly insists on being dour, even though the outfits are made for someone with a little pep. If Cher Horowitz existed in today's society, she would be drawn to these ensembles. Who has more pep than Cher?

The editorial starring Cara Delevingne for Vogue China was shot by photographer Angelo Pennetta. Appearing in the February 2013 issue of the magazine, the British beauty was outfitted by stylist Elissa Santisi. She chose structured pieces from the likes of Dior, Marc Jacobs, Altuzzara and Louis Vuitton to contrast with the laid-back setting. Tousled hair by Maranda and natural makeup by Pep Gay finished the looks.
6.6
Score
Popularity
Activity
Freshness
Attend Future Festival Virtual