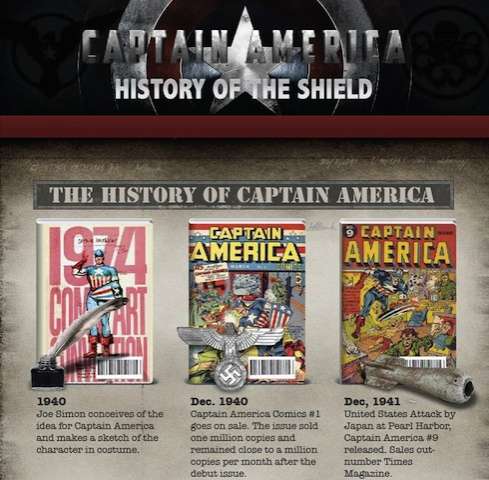 This Captain America Infographic Tracks the History of the Shield

Corinne Guirgis — July 24, 2011 — Pop Culture
References: militaryvaloan & holykaw.alltop
Share on Facebook Share on Twitter Share on LinkedIn Share on Pinterest
The recent much-anticipated release of 'Captain America: The First Avenger' can be attributed to the story's incredible history, which is concisely summarized in this Captain America infographic. Revisiting its progress dating back to the comic book's original inception in 1940, the infographic outlines some key statistics and elements of both the graphic novels and film adaptations.

The series' incredible cultural influence is captured in this artistic display of pop culture history, and draws mind-blowing correlations between its massive readership and historical events such as the bombing of Pearl Harbor and the end of World War II. Six hundred issues, four films and one giant shield later, Captain America goes down in history as one of the most culturally significant franchises of all time.

Implications - Certain stories and characters are regarded in history as timeless and incredibly significant. These stories that stand the test of time will continue to evolve through new perspectives and lenses, especially as technology enables filmmakers and illustrators to take these popular characters and stories to new heights.
4
Score
Popularity
Activity
Freshness
Get Better and Faster