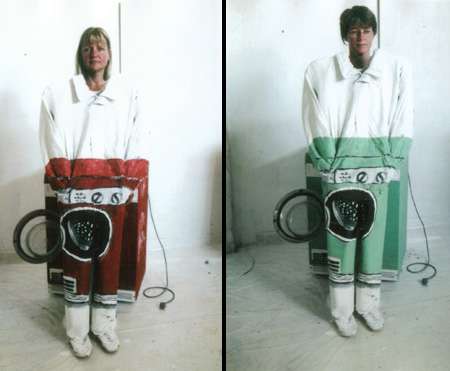 Ana Lopez — September 30, 2011 — Art & Design
References: laurentlagamba.free.fr & toxel
Going to the grocery store and becoming unnoticed is possible in the photography series called Camouflage Art by Laurent La Gamba. The French artist perfectly manages to blend in her protagonists with their backgrounds.

This series is astonishingly well-done as it's hard to discern what is actually happening in the pictures. This optical illusion occurs because each person wears a suit that faithfully imitates his or her background. For example, one photo presents a woman who is half wall, half washing machine. The costumes are so realistic and detailed that many of the subjects appear totally absorbed by their environments.

A similar series called The Invisible Man was done by Chinese artist Liu Bolin, where his characters also almost disappear in their backgrounds. Interesting and suggestive, The Camouflage Art by Laurent La Gamba is a great visual achievement that requires a lot of effort and preparation to make it work.
3.4
Score
Popularity
Activity
Freshness