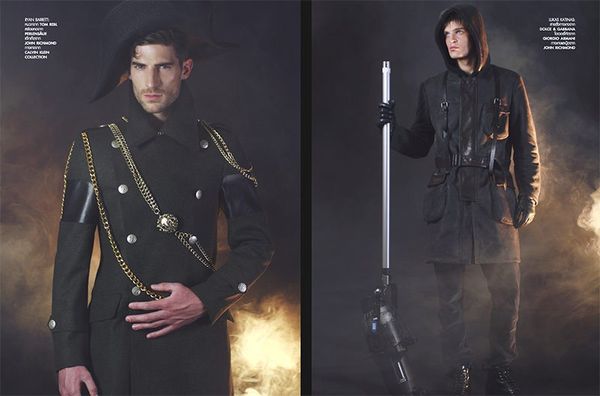 Laura McQuarrie — November 1, 2013 — Fashion
References: thefashionisto & derriuspierre
The ‘Call of Duty’ men’s editorial in L’Officiel Hommes Thailand depicts a diverse cast of models in an equally wide range of battle regalia. The photoshoot was captured by Livia Alcalde and features the incredible styling of Pablo Patane.

The clever name of the editorial references the popular video game and the editorial shows all types of fighters, from beat-up World War-era pilots to urban warriors and dapper generals, fully decorated with badges from previous battles. Whether you imagine these men to be serving on the front lines of the battle field, or making strategic battle plans from afar, each role is celebrated in this spread.

Although there is nothing glamorous about war, this editorial makes battle so chic, you may even find yourself wanting to be drafted into the army.