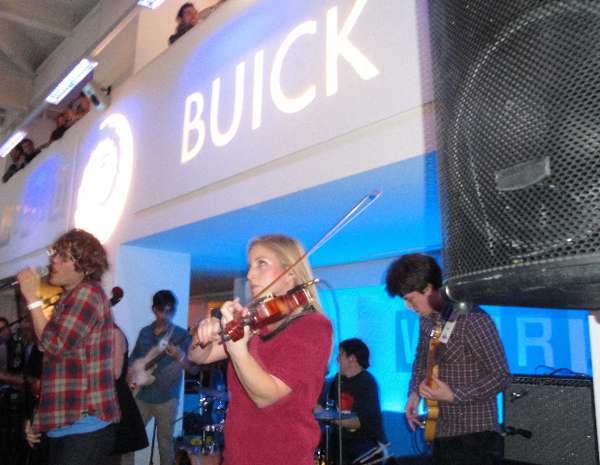 Jonelle Fenton — December 17, 2010 — Autos
References: wiredstore.net & buick
Share on Facebook Share on Twitter Share on LinkedIn Share on Pinterest
(SPONSORED) Trend Hunter attended the Wired pop-up store's Buick ‘Regal Remix’ event on December 8th in New York City, which was sponsored by Buick. After testing out the slick new Buick Regal via the virtual race track, telling our friends about it on the Moment of Truth plasma touchscreen and taking photos in racing attire at the Buick photo booth, it was time for some Christmas entertainment.

Indie rock band Ra Ra Riot was there to put some punch in the eggnog, playing songs from their new album, ‘The Orchard.’ Their energetic live show, complete with a cellist and violinist, kept us dancing until the last strum. Ra Ra Riot is da- da- damn good!

After the performance, we continued to tour the Wired store, making mental wish lists of the gadgets on display. The bamboo keyboard and mouse were one of the attention-grabbers as they’re pleasing to the eye as well as the environment; it can’t hurt to add a little more green to Christmas!

Another highlight was the Buick Regal car shuttle home. When do you ever get a free ride in NYC -- and a luxury one at that? All in all, the Wired store Buick ‘Regal Remix’ event was a blast. Make sure to check out the Trend Hunter-approved items from the store in the upcoming articles!