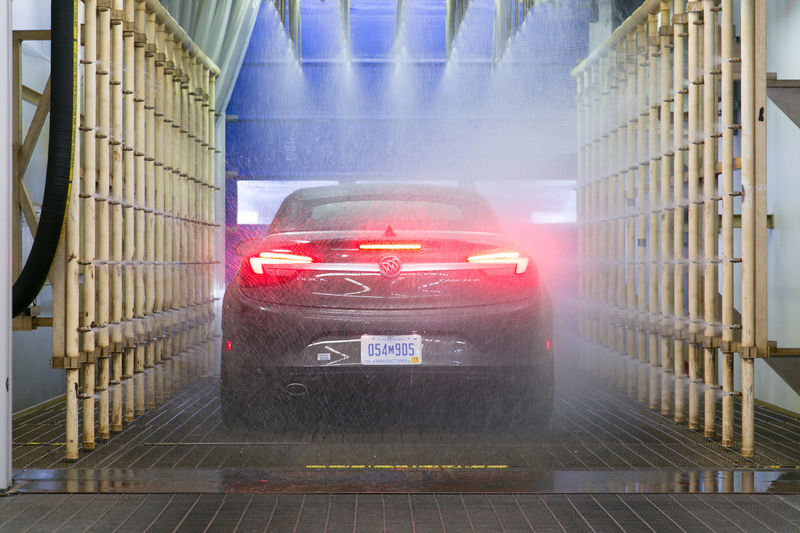 Trend Hunter Returns to 'The D' to Explore Buick Engineering

Rebecca Byers — June 9, 2015 — Autos
References: buick
For the third installment of our year-long #ExperienceBuick journey, I was lucky enough to visit the ever-evolving city of Detroit and check out both the GM design and tech facilities in Warren and the iconic Milford Proving Grounds.

GM Technical Center in Warren, MI
A design and engineering-focused trip, I kicked off our whirlwind 48 hours with a short drive out of Detroit to Warren, Michigan, where the iconic General Motors Technical Center is located. The epic campus is a designated National Historic Landmark and covers an area of 710 acres. Designed by Finnish architect Eero Saarinen, the campus is home to the company’s research & development facilities, its design center, and numerous engineering and manufacturing buildings. As a fan of anything design-related, I was thrilled to be able to get a peek into the creative processes of a well-established brand like Buick that has fused its traditions with functionality that speaks to the desires of the modern consumer.

Over the course of the day, I was lucky enough to tour the General Motors Design facilities, the Trim Shop and the impressive Rapid Prototyping Studio on the sprawling Warren campus. A personal highlight was getting to try out futuristic Virtual Reality Cave, which is used to better inform spatial design pertaining to the car’s interior.

An additional highlight was getting to discuss the design process for the 2016 Buick Avenir concept car with the color and trim designers themselves. Taking inspiration from everything from runway fashion to cosmetics packaging, the team made it clear that their creative insights are just as central to vehicle design and innovation as any physics-based engineering analysis. Throughout the tour, I was kept abreast of the design and engineering processes that have put General Motors and Buick atop the industry in their application of cutting-edge technology.

Milford Proving Grounds
A sprawling 4000-acre facility, the Milford Proving Ground was the automobile industry's first dedicated testing track, and is one of the most exciting places to visit for any car fanatic. The facilities contain an incredible 312-miles of road that represent the varied conditions one would experience on public roadways. The Milford Proving Ground, just like the GM Tech Center, is a highly secure facility to which only designated employees have access, so I was beyond excited to be along for the ride, to say the least.

Our first stop at the Proving Grounds was to check out the anechoic chambers, in which acoustics experiments are carried out. The contained environment allows for complete silence, mimicking that of a "free field." The only way I can describe being inside one of these chambers is that the silence is almost deafening and the stillness is otherworldly. After that, I was taken over to the water testing facility, which you may recognize from this sweet commercial. I was able to experience that exact water test from the inside of the Buick Cascada luxury convertible, and I can tell you that it holds up perfectly.

To round out the phenomenal tour through GM’s iconic private facilities, I had the rare chance to drive the Proving Grounds’ infamous Black Lake Challenge Course. Colloquially known as Black Lake, the proper name is the Vehicle Dynamics Testing Area and it is essentially a 67-acre pad of blacktop which, due to its smooth surface, is occasionally mistaken for an actual lake by waterfowl. I was privileged enough to be one of the first to test drive the 2016 Cascada, which is definitely an experience I won’t soon forget.

A thriving Detroit culinary scene provided plenty of options for the discerning foodie, and I was lucky enough to experience both Wright & Company and Gold Cash Gold. Both restaurants are relatively new and serve as symbolic beacons of a city’s revitalization, as both are housed in stunning overhauled facilities with decor that recalls the spaces' former glories while carving out new ones. Wright & Company serves up an impressive menu of contemporary American fare in a former ballroom, while Gold Cash Gold offers seasonal dishes with French-Southern inspiration against the backdrop of a former pawn shop from which it took its name. Both restaurants feature the trendy small plates style menu.

I also had the opportunity to take an inspiring tour of some of Bedrock Commercial Property Management’s buildings that play host to some of the exciting companies and startups that now call Detroit home. The tour began at the stunning One Campus Martius building in the heart of downtown Detroit, which is home to an epic executive floor for Bedrock and Quicken Loans that boasts a Cleveland Cavaliers-branded half-court (Quicken Loans is Detroit-based but owns the Cavs) with an awe-inspiring view of the central business district. I also got a peek of the Chase Tower, home to a former bank vault now used as a conference room for dPOP!, a progressive office design firm.

Each of the stops on my tour provided me with a different perspective on a city and brand in the midst of a period of true, American reinvention. Detroit is overflowing with passionate, talented individuals and exciting new businesses that are a clear natural extension of the appreciation for craftsmanship, of building something new and for breaking the rules all rooted in the origin story of Buick and General Motors that's so close to the city's own journey. I personally can't wait to see what else is in store on our year-long #ExperienceBuick adventure.