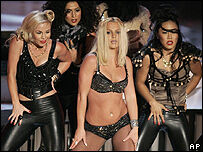 "We have terminated our professional relationship with Britney Spears," The Firm confirmed. "We believe she is enormously talented, but current circumstances have prevented us from properly doing our job."

Trend Hunter has been covering her string of faux-pas, so it comes as no surprise to us -- she's been walking a tight rope. Ironically, Spears has been trying to make a comeback, and her performance at the MTV Music Awards was supposed to kick off the launch. Her new album will still debut on November 13.

You better believe she still has fans though. Check out the video Chris Crocker did in an attempt to defend the Popstar on Jimmy Kimmel.
2.4
Score
Popularity
Activity
Freshness
Jeremy Gutsche Keynote Speaker