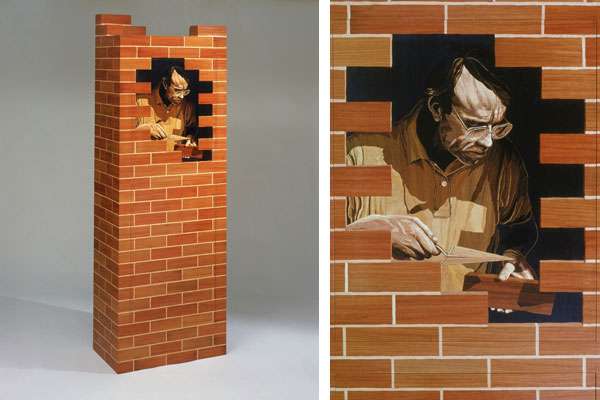 Meghan Young — April 11, 2012 — Art & Design
References: silaskopf & mymodernmet
Share on Facebook Share on Twitter Share on LinkedIn Share on Pinterest
It is not everyday that a piece of furniture like Bricolage by Silas Kopf comes around in which the designer has trapped himself or herself inside. Thankfully, it is all an illusion. What appears to be a brick column is actually a wooden cabinet. This cabinet has been carefully crafted to make it appear as though the American furniture designer made it from the inside out, effectively containing himself in his own creation.

Crafted out of narra wood from the Philippines, which is very close in color to actual red brick, Bricolage by Silas Kopf also boasts curly maple strips that mimic the mortar. Named after the French word for handyman work, Kopf writes, "I liked the idea of having me involved in an activity (masonry) that is foreign to my daily work. I assure you that if I were to do masonry, it would be considered bricolage."
2.5
Score
Popularity
Activity
Freshness
View Innovation Webinars

Creatively Concealed Storage
The Facecord Cabinet Plays With Our Perception