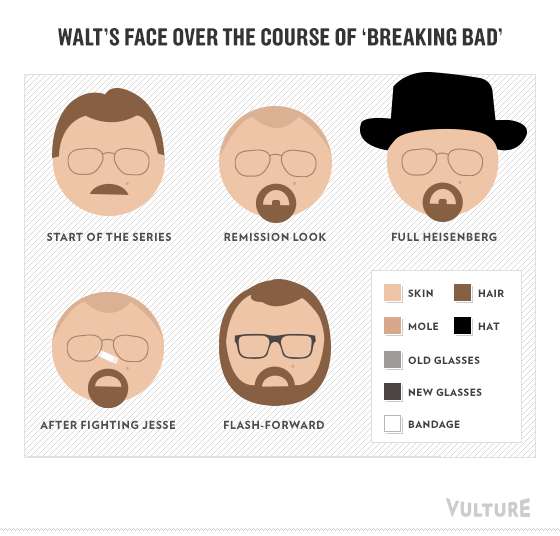 One of the funniest infographics in the series pokes fun at Walt's unhealthy breakfasts, measuring the amount of cholesterol in his birthday's breakfasts throughout the years. This infographic also plays on the show's running joke of eating breakfast, as that's often the only time that viewers see some of the secondary, recurring characters, such as Walt's son, Walt Jr., giving viewers the sense that that's all these characters do.

Another hilarious infographic pokes fun at Walt's ever-changing look. This chart documents his "remission look," his "full Heisenberg" appearance, and even his "flash-forward look." Walt is constantly shaving his head, donning strange, wide-brimmed hats, letting his beard grow out, etc., which reflects his changing personality. This infographic parodies these appearance changes, revealing how truly ridiculous it is that Walt constantly changes his appearance to appear tougher as he becomes more and more embedded in the drug-dealing business.

While Breaking Bad is full of tension and suspense, as well as blood-curdling drama and unexpected deaths, these infographics will put a light twist on everything, from Jane's easily preventable demise to Gus's melted face.
5.7
Score
Popularity
Activity
Freshness
View Innovation Webinars