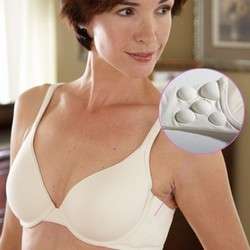 The Intimate Health ‘Brassage' Claims to Kneed Away Toxins

Rainer Takahashi — April 1, 2009 — Fashion
References: abcnews.go
Share on Facebook Share on Twitter Share on LinkedIn Share on Pinterest
Brassage, a bra the inventor claimed would improve breast health by massaging away toxins, has been pulled from the market. Once sold by Intimate Health for $59 USD, the bra had received rave reviews in ELLE, Teen Magazine, and Consumers’ Digest, among many other elite media outlets.

The Brassage was pulled after ABC’s GMA report showed there was no medical science backing up the inventor, Christina Erteszek’s, claims and argued that it was ‘exploitative’.

Unfortunately for women, this is one great trend idea that did not pan out.
4.3
Score
Popularity
Activity
Freshness
Attend Future Festival Virtual