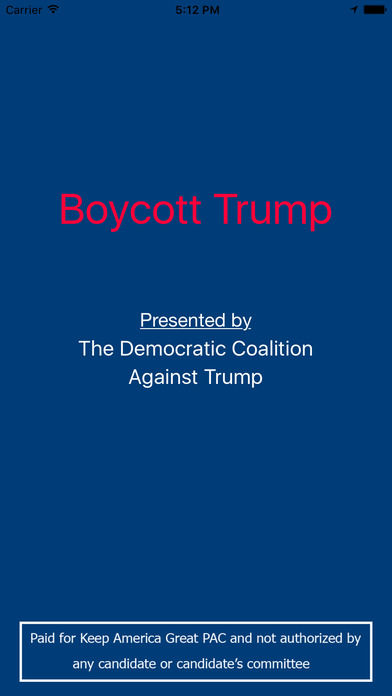 Joey Haar — November 29, 2016 — Pop Culture
References: itunes.apple & techcrunch
Share on Facebook Share on Twitter Share on LinkedIn Share on Pinterest
'Boycott Trump,' an app created by the 'Democratic Coalition Against Trump,' helps users vehemently opposed to the president-elect to avoid him from a financial perspective. Donald Trump is a wealthy businessman, and he has vested interest in companies all around the US; Boycott Trump lists all those interests, allowing consumers to stay away from him if they so please.

The businesses listed in the Boycott Trump app have varying degrees of connection to Donald Trump. Some are direct, such as businesses like Florida Properties Management, on the board of which Donald Trump serves. Others are more distant -- for instance, Starbucks is listed in the app because it has a location in a Trump Tower.

Though simple in terms of layout, Boycott Trump helps politically active users to protest the president-elect with their spending decisions.
1
Score
Popularity
Activity
Freshness
Get the 2021 Trend Report FREE