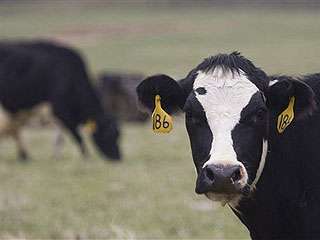 Generally, it appears that you can use cows in the field as compasses. Be careful, though, because not all of them are reliable. Only about two-thirds of them will face north-south, but according to Fox, "Two-thirds is close to what the researchers found in their look at 8,510 cattle in 308 pastures. In the study, 60 percent to 70 percent of cattle were oriented north-south, which [researcher] Begall termed a 'highly significant deviation from random distribution.'"

Naturally, the study has the scientific community buzzing with theories as why this is true, ranging from sensitivity to the Earth's magnetic field, to location of fences, to temperature control. According to Tina Hinchley, a dairy farmer from Wisconsin, "They don't like to get hot. Their body temperature is 102, (34 Celsius) and they are wearing black leather jackets, literally! If turning north-south would keep them cooler, they would stand that way."

It might sound like pretty easy work, but performing the study was not without risk. According to the news report, "With satellite images they could tell the north-south orientation of the animals, but not whether an individual cow was facing north or south. You have to get closer to tell which end is which."
1.6
Score
Popularity
Activity
Freshness
Get the 2021 Trend Report FREE