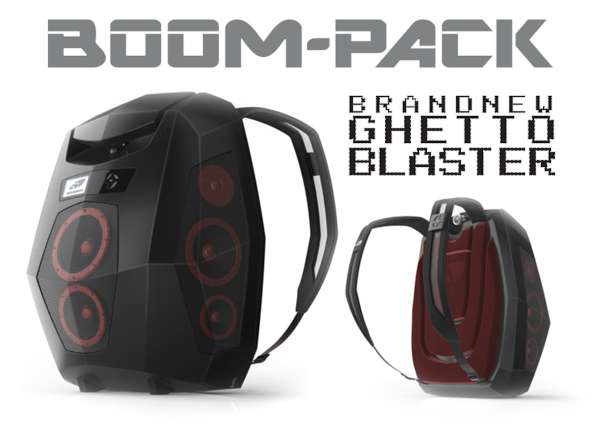 The Boompack is a Wearable Multimedia Entertainment Unit for the Streets

Amelia Roblin — January 15, 2013 — Tech
References: givingshape.it & tuvie
The modern version of the 1980s boombox-on-shoulder practice is replaced by the Boompack by Givingshape Design. Until this, the focus on personal media players has meant that there hasn't really been a great alternative to the ghetto blaster, in terms bringing music to groups of friends outdoors.

This is a hi-tech knapsack measuring roughly 50 centimeters by 40 centimeters in width. It integrates an iPhone dock into its core, a remote control into its strap and an LCD screen into its front, above its impressive speakers. More amps can be found up and down the sides of the hard shell sack, yet the most amazing feature introduces a visual dimension as well. The Boompack's built-in pico projector enables you to turn any concrete wall into a giant screen for music videos and more.
6.7
Score
Popularity
Activity
Freshness