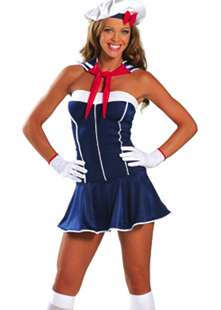 Bianca — September 16, 2007 — Naughty
References: news.au
Share on Facebook Share on Twitter Share on LinkedIn Share on Pinterest
The Australian navy is enticing female recruits by covering the costs of breast augmentation surgery. No, not to be used as personal flotation devices in case of emergency; the benefits are reserved for female sailors who suffer psychological complexes due to their bust size. Each boob job costs $10,000, the funds of which come from Aussie taxpayers.

Until now, they probably haven't received too many complaints from male colleagues, but after the information was leaked today, complaints are sure to come rolling in. Taxpayers down under will no doubt begin expressing their disappointment... and the navy could get a lot of calls from interested women!

The Australian government isn't the first to back up cosmetic surgery. In the spring, Trend Hunter featured Lebanon's liposuction loans and last month featured the government funded sex-change surgeries in Brazil.