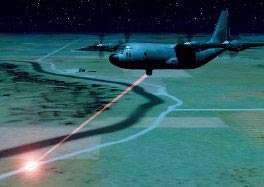 Going Like Sixty — December 18, 2007 — Unique
References: neatorama
Ever since the military invented the laser, they have been expanding its use as a weapon. The latest is Boeing's instillation on a C-130H.

"Boeing completed the laser installation Dec. 4 at Kirtland Air Force Base, N.M. The laser, including its major subsystem, a 12,000-pound integrated laser module, was moved into place aboard the aircraft and aligned with the previously-installed beam control system, which will direct the laser beam to its target," according to Neatorama.

The aircraft will be tested in early 2008. The goal is the ability to destroy a target with minimal collateral damage.