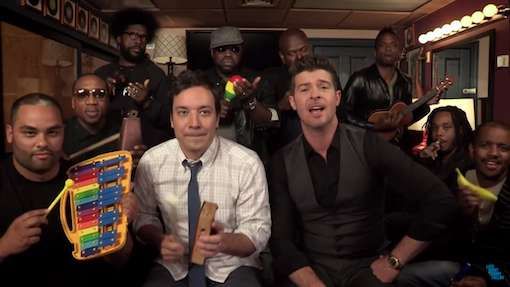 Unlike the other parodies that have been released this summer, this one actually features Robin Thicke who joined Jimmy Fallon on his show. The pair was backed up by The Roots for musical accompaniment. However, instead of the sound of drums, guitars and keyboards filling the room, the team decided to use playful instruments you'd normally find in a kid's room, including a colorful xylophone and a cowbell among many.

On top of the instrument change, Black Thought replaced TI for the rap and made the lyrics kid-friendly and positive saying, "you've got brains, looks, and attitude." Now that the song has been changed to appeal to kids, it's safe to say it'll be awhile before this song gets blurred out.
1.8
Score
Popularity
Activity
Freshness
Attend Future Festival