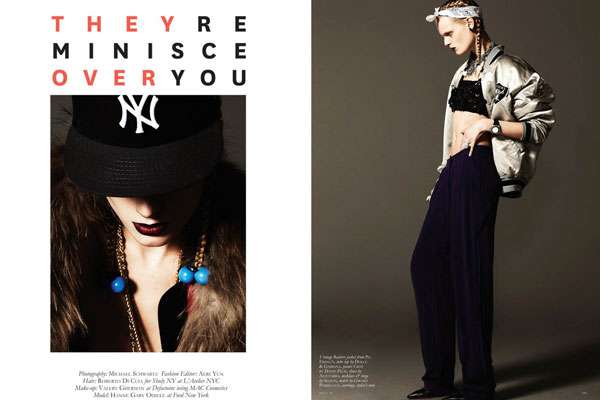 The Black Magazine 'They Reminisce Over You' Editorial is Urban

Meghan Young — May 21, 2012 — Fashion
References: blacklognz.blogspot & fashiongonerogue
Share on Facebook Share on Twitter Share on LinkedIn Share on Pinterest
It might be strange to describe the looks showcased throughout the Black Magazine 'They Reminisce Over You' editorial as ladylike, but they have a sophisticated femininity about them that cannot be denied. It doesn't matter that there is a strong urban element to the ensembles, the looks are made for the modern woman who wants to embrace her cultured side while having fun with some retro details.

The Black Magazine They Reminisce Over You editorial was lensed by Florida-born, New York-based photographer Michael Schwartz for the 16th issue of the publication. Inspired by the '90s, the photoshoot was styled by Aeri Yun. The New York-based stylist put together a wardrobe filled with the likes of Chanel, Blumarine, Cynthia Rowley, Preen and more. Roberto Di Cuia created the braided hairdos while Valery Gherman worked with dark lips.
5.8
Score
Popularity
Activity
Freshness
Attend Future Festival