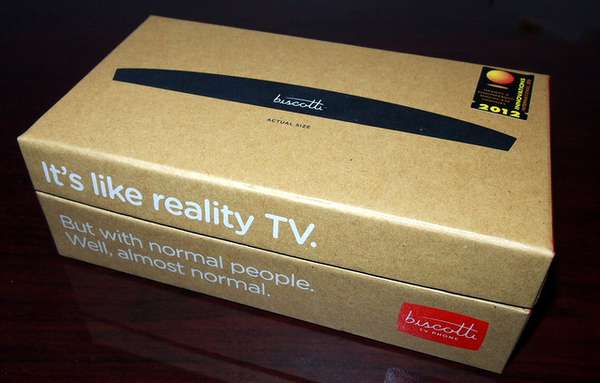 Maria Valdivieso — January 8, 2012 — Tech
References: mashable & mashable
Share on Facebook Share on Twitter Share on LinkedIn Share on Pinterest
The Biscotti TV Phone is a sophisticated face-to-face communicator that allows users to talk in real time with each other through the aid of an HDTV as a portal. The concept is not as revolutionary as its sleek and clean packaging, which resembles a marriage between mid-century design and minimalist Apple packaging.

The Biscotti TV Phone has been created by the New York-based tech company CES, and is set to be launched to the market on January 9th. The smart packaging is infused with inviting humor with phrases such as “It’s like reality TV but with normal people, well almost normal people." The use of sarcasm and clever puns makes this seemingly complicated apparatus seem friendly, simple and easy to use: an astute way to tap into a market not familiar with the product, which is exactly Biscotti’s aim.

Anyone from grandparents to college students and especially those with Internet and computer phobias will be able to chat on real time, face to face with this product.
3.4
Score
Popularity
Activity
Freshness
Jeremy Gutsche Keynote Speaker