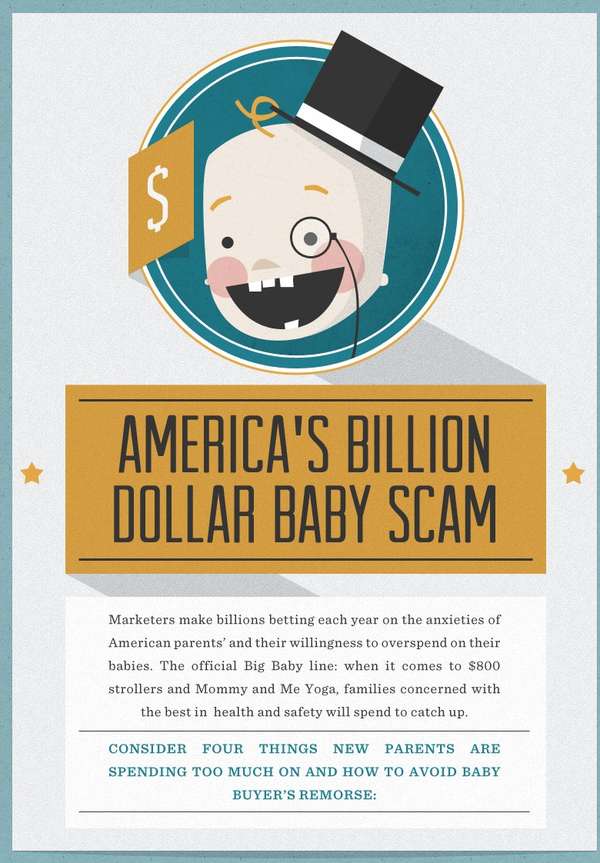 Rebecca Byers — March 9, 2012 — Lifestyle
References: frugaldad & frugaldad
Share on Facebook Share on Twitter Share on LinkedIn Share on Pinterest
FrugalDad.com's America's Billion Dollar Baby Scam infographic is a critical review of the marketing of baby products and toys that target overzealous and at times, paranoid parents who seek to provide the best for their children. As FrugalDad.com points out in the infographic, however, the most expensive product is not always the best, despite how well it may have been marketed to seem as a necessity to the mental and physical development of a newborn baby.

The America's Billion Dollar Baby Scam infographic is a comprehensive review of a booming industry and includes some examples and statistics involving "debunked" baby products that previously dominated the market under false pretenses. An example of this is Disney's 'Baby Einstein' series, which produces yearly profits of nearly $200 million. The DVDs were marketed as educational, but in 2009 it became clear that they did not encourage the education of children like they first claimed.
4
Score
Popularity
Activity
Freshness
View Innovation Webinars