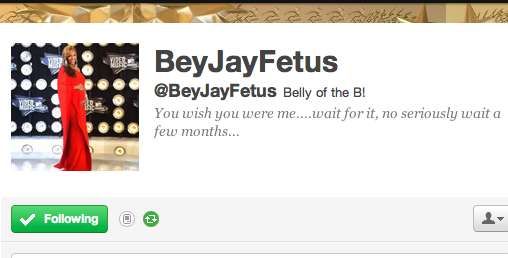 Premiering just minutes after the shocking moment, BeyJayFetus gained 900 followers before the night was over. The fictional account definitely means well, with a hilarious description which reads, "You wish you were me....wait for it, no seriously wait a few months..." and the location set as "Belly of the B!"

As a huge fan of Beyonce and her rap legend husband, the pregnancy announcement definitely made the 2011 VMAs even more memorable than they already were, with tribute performances to both Amy Winehouse and Britney Spears throughout the night. I'm sure the BeyJayFetus Twitter will continue to keep fans entertained throughout the entire pregnancy process, with a never-ending supply of witty tongue-in-cheek tweets from what can only be called "destiny's child."
5.5
Score
Popularity
Activity
Freshness
Jeremy Gutsche Keynote Speaker