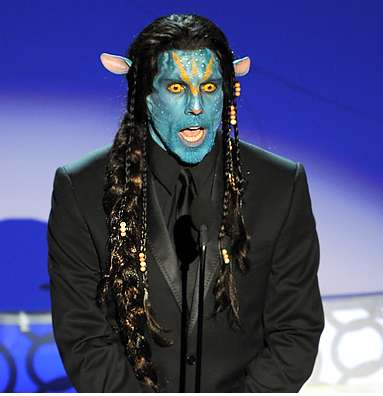 Ben Stiller's Costume at the Academy Awards Gets Laughs

Shelby Lee Walsh — March 8, 2010 — Pop Culture
References: etonline
Share on Facebook Share on Twitter Share on LinkedIn Share on Pinterest
Ben Stiller's costume at the Academy Awards was one of the most memorable points of the evening. As the presenter for the Best Makeup category, Stiller came out in Avatar attireâ€”complete with yellow eyes, braids, pointy ears and a tail.

Even though Avatar was not nominated in this category, Stiller got right into character speaking Na'vi, but admitted he should have just stuck with Spock ears instead. Oh well, there's always next year, Ben.

Implications - References to popular movies or televised events act as an outlet for companies to express their creative talent and knowledge of popular culture. Companies who incorporate such references better guarantee that they will stay ahead of popular movements in mass society.
5.8
Score
Popularity
Activity
Freshness
View Innovation Webinars