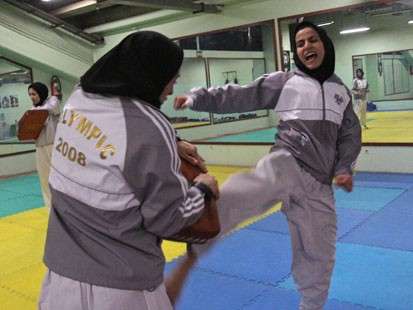 Ayman — July 28, 2008 — Social Good
References: rferl.org
Share on Facebook Share on Twitter Share on LinkedIn Share on Pinterest
Ali Asghar Purmohammadi, the man responsible for broadcasting sports programs on Iran's state-run television, has said he is trying to convince Iranian authorities to give special permission to broadcast female competitions in the 2008 Beijing Olympic Games. Now why would he need a special permission? Because Iran usually frowns upon competitions that show female athletes not observing the Islamic dress code.

Unless the authorities grant the special permission, the Iranian public will miss on cheering even those few female athletes that did make it.

â€œThey obey all the rules. They are allowed to take part in sports. So why shouldn't they be shown on television?â€ Fatemeh Sepanji, a Tehran-based sports commentator asks. â€œObviously they will be shown [on TV] all over the world [when they compete in the Olympics]. What is the point of showing them in one country and hiding them in another?â€
2.5
Score
Popularity
Activity
Freshness
Get the 2021 Trend Report FREE