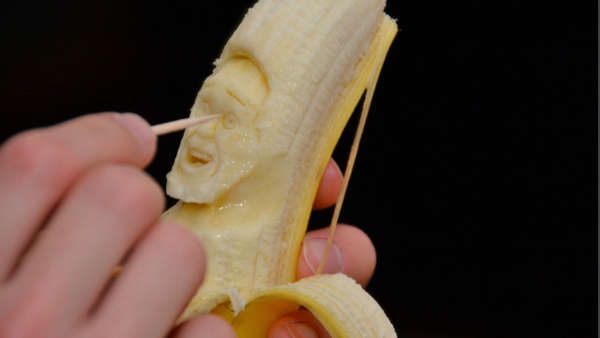 This Amazing Banana Sculpting Will Drive You Bananas

Working with the rapidly rotting fruit, Yamada must sculpt quickly, lest his canvas rot away while he’s at work. With that in mind, it’s very impressive the level of detail that he is able to accomplish using only the interior of fruit to make his carvings. Generally, Yamada will do his banana sculpting using basic carving tools and toothpicks for the finer details.

When Yamada appeared on a Japanese morning show, he carved an incredibly detailed face in real time on the set of the show. That’s to compliment his new works like a skybound castle and an incredibly detailed shark. Each example of banana sculpting takes Yamada about 15 minutes to complete. Yes, he does eat his creations after he’s done, meaning that he can have his banana sculpting art and eat it too!