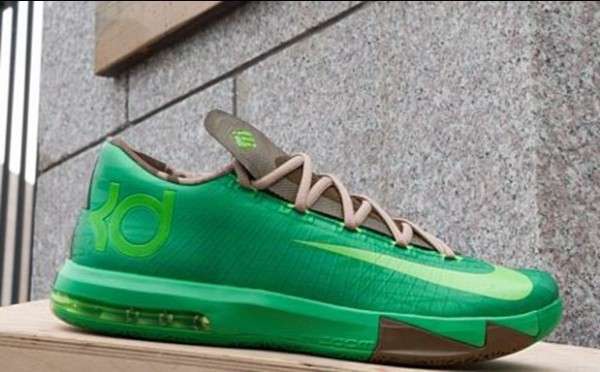 Thomas Wade-West — September 7, 2013 — Lifestyle
References: sneakernews
Share on Facebook Share on Twitter Share on LinkedIn Share on Pinterest
Basketball season is about to start, which means we can expect a ton of new endorsed sneakers to hit shelves this Fall. One sneaker that has received a lot of attention is Kevin Durant's KD 6 'Bamboo.' Coming off a near-championship title in 2012, KD and his sneakers are coming back at full force.

Besides being visually eye-catching, the 'bamboo' concept is both representative of a few key things, and metaphoric. In Chinese culture, the bamboo plant is representative of strength and growth, which are two primary qualities that have been used to describe Kevin Durant's playing style and athletic ability in the NBA.

This green, leafy color-way is eye-catching and will be an optimal choice for athletes and fashion gurus. You will be able to lock down your pair on September 14th when they drop in North America.
4.5
Score
Popularity
Activity
Freshness
View Innovation Webinars