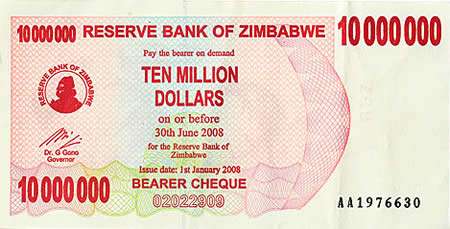 Billion Dollar Bills From Around the World

Marissa Brassfield — August 16, 2008 — World
References: oddee
Share on Facebook Share on Twitter Share on LinkedIn Share on Pinterest
Anyone who’s ever complained about the poor U.S. economy has no reason for complaint compared with the inflation that’s run rampant in these six countries. Take Zimbabwe, for example. This country was once one of Africa’s wealthiest. Today, 10 million Zimbabwean dollars is a mere $4. There, a Z$100 billion bill gets you...two loaves of bread. Daily expenses are now discussed in terms of trillions in Zimbabwe. Ouch.

This gallery features some of the most inflated bills from around the world. Collecting these bills could be a great way to generate attention for store or even your own home.