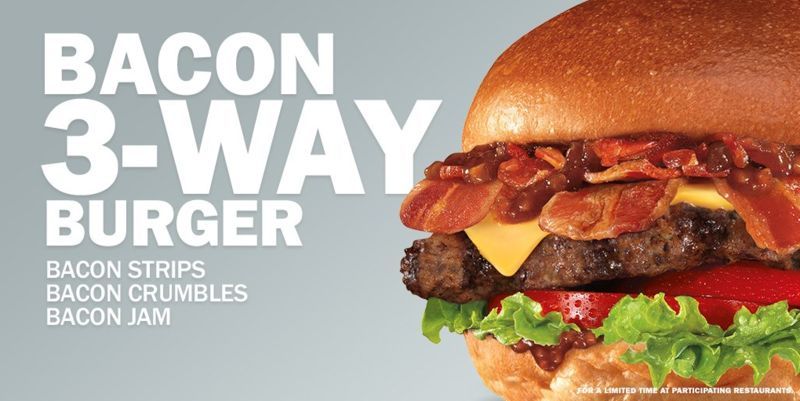 Katherine Pendrill — July 27, 2016 — Lifestyle
References: twitter & brandeating
Share on Facebook Share on Twitter Share on LinkedIn Share on Pinterest
While it may seem as though America's fascination with bacon has waned, Carl's Jr. and Hardee's demonstrate that the meaty ingredient is just as popular as ever with its new Bacon 3-Way Burger. Instead of simply tossing more bacon on top of a burger patty, the brand has come up with three clever new ways to incorporate the smoky topping.

The Bacon 3-Way Burger is a decadent new burger option available at both Carl's Jr. and Hardee's locations. The burger consists of a charbroiled beef patty, tomato, lettuce and American cheese topped with bacon prepared three different ways. In addition to strips of bacon and crumbled bacon bits, the burger also features a layer of sweet bacon jam made from bacon, caramelized onions, balsamic vinegar and molasses. All of the toppings are served on a brioche-style bun to complement the sweetness of the bacon jam.
4.7
Score
Popularity
Activity
Freshness
Get Better and Faster