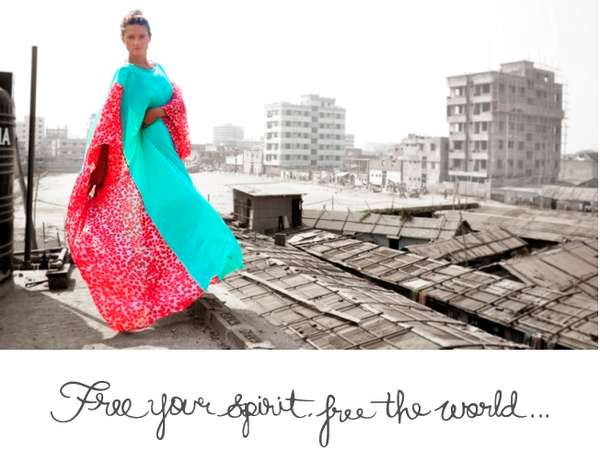 Bianca — February 29, 2012 — Social Good
References: bachhara
Share on Facebook Share on Twitter Share on LinkedIn Share on Pinterest
Bachhara is a Fair Trade fashion line created in the JAAGO Sewing Centre in the Rayer Bazar slum in Bangladesh. They produce colourful and feminine garments made of ethical silk, and the profits give the seamstresses the chance to earn a fair income so they can take care of themselves and their families.

Bachhara was founded in 2009 by Australian social entrepreneur Amanda Ryan after an experience teaching art at the JAAGO Foundation School in Bangladesh. In that time she met an 8-year-old boy and his single mother who worked 90 hour weeks -- 13 hours a day, every day -- to earn about $10 a week.

Fortunately, the JAAGO Foundation School accepted the boy just as he was starting to get involved with drugs and gangs, which saved him from some trouble. While the education was very helpful for the boy, Amanda realized something also had to be done to empower his mother -- and other women like her in the area. This led Amanda to develop the JAAGO Sewing Centre, followed by Bachhara, where women in the Rayer Bazar slum could receive fair employment opportunities.

"When JAAGO’s director, also an unpaid volunteer, was forced to leave his salaried job to run JAAGO full-time, Amanda invested her life savings to keep JAAGO a float," the website explains. "Quickly assuming the role of Project Director at JAAGO, Amanda worked 7 days per week for a year to help move the organisation forward. The children and volunteers of JAAGO became Amanda’s world."

The gallery shows just a hint of the beautiful results of that big-hearted commitment. She now splits her time between Australia and India, where she returns every two months.