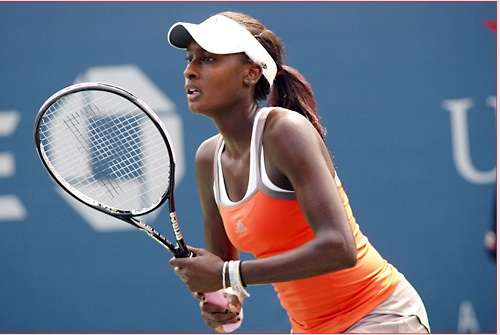 Asia Muhammad Plays With Diamonds at US Open

Not only did Muhammad make her debut, but for Michael E. Minden Diamond Jewelers, it was also their chance to shine as this was the sparkling racket’s “World Debut.”

You don’t have to be an up and coming tennis star to have your initial or initials glisten for all to see, Minden Jewelers also does diamond engravings on other athletic equipment. The cost to have your initials twinkle with .50 carats will cost you $1750, add another letter and the cost will be $3400.  No need to worry if your equipment wears out as the company has the technology to transfer your engravings.

Unfortunately for Muhammad, her girl’s best friend racket didn’t make the grade as she was defeated 6-2, 6-4 by France’s Aravane Rezai Monday in the first round of the U.S. Open.

Regardless of her loss, Muhammad is a spectacular young tennis player. Give her a few years and she just might be up there with Venus and Serena Williams.
4
Score
Popularity
Activity
Freshness
Get Trend Hunter Dashboard