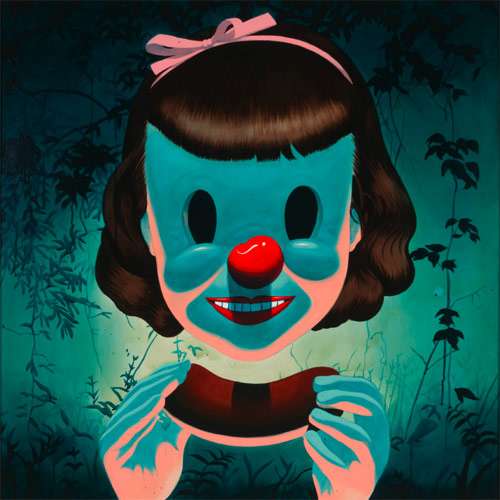 As an artist, Victor Castillo shines for his ability to use different levels of shading, lighting, and color to create a mood in his artwork that is reminiscent of your scariest childhood nightmare. The 38-year-old Chilean painter began drawing when he himself was just a child. He inspirations stem from cartoons, science fiction movies, and Pink Floyd's 'The Wall.'

The strength of the Victor Castillo illustrations lies in his ability to establish a dark, gloomy mood while drawing very basic characters, often wearing accessories fit for small children, thus increasing the creepiness quotient. My favorite illustration in this collection features a well-dressed young boy holding a parrot on his arm and looking at the camera with the sort of ominous grin fit for an evil clown. As an artist, Victor Castillo's work is perhaps best defined by this image. Contrasting youth with a frightening image, he forces the viewer to hone in on his illustration and decide whether they find it endearing or terrifying.

Up next for Victor Castillo: His own solo show in Hamburg, Germany, set for September 2011.

Implications - In the last few years, Hollywood has seen a strong movement towards comic book and animated character film adaptions. One of the reasons for this is the marketing angle that these characters provide. A company can capitalize on this by investing in marketing that features their own animated character and then selling products featuring his/her likeness (action figures, comics, t-shirts).
5.6
Score
Popularity
Activity
Freshness
View Innovation Webinars