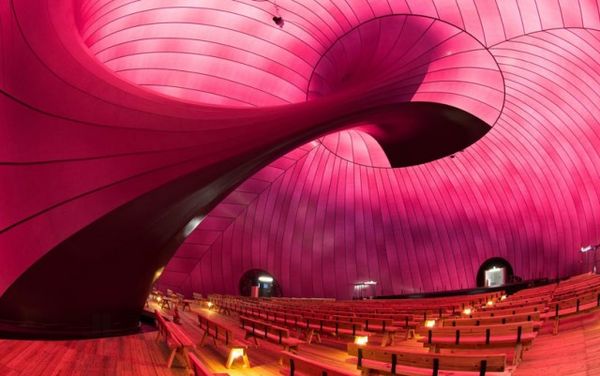 Meghan Young — September 28, 2013 — Art & Design
References: ark-nova & fubiz.net
Share on Facebook Share on Twitter Share on LinkedIn Share on Pinterest
The Ark Nova looks like the belly of a giant whale. The glowing pink interior could easily be mistaken for the stomach, essentially turning every spectator into Geppetto, Pinocchio's father. In reality, the Ark Nova is the first ever inflatable concert hall. It was created for the Lucerne Festival Orchestra concert that will be held between September 27, 2013, to October 13, 2013.

Designed by artist Anish Kapoor and constructed by the architecture studio Arata Isozaki, the Ark Nova concert hall is quite the sight to behold. The organic look of the inside is continued outside. But this time is looks more like a donut-shaped eggplant. Installed in Matsushima, Japan, the Ark Nova strikes a rather minimalist albeit colorful pose.
1.5
Score
Popularity
Activity
Freshness
Attend Future Festival