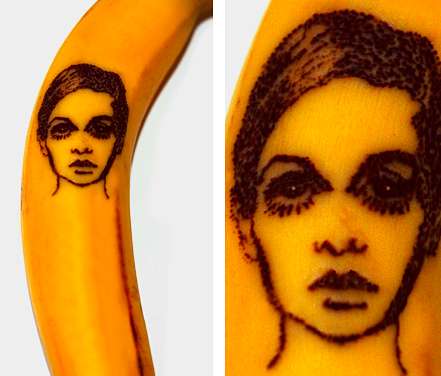 The Artist Honey Sweet-station Pieces Are Made with Bananas

Jordy E — February 8, 2013 — Art & Design
References: hoooneyyyimhooome.tumblr & mymodernmet
Artist Honey, the developer of the Sweet-Station site, has unveiled a series of artistic pieces that have been made by way of small bananas. The illustrator used the yellow peels to depict images of Bob Marley, Jim Morrison and Twiggy among others.

These portrayals of musical and pop cultural icons are remarkably detailed in spite of the fruit-based canvas that she etched them out upon. This was further complicated by the safety pin with which she used to capture their distinctive facial features.

Artist Honey’s dots came together seamlessly, a feat that was accorded with a humorous tone as she also spelled out the phrase “I want a banana split,” and especially by her use of a snack as an art medium.