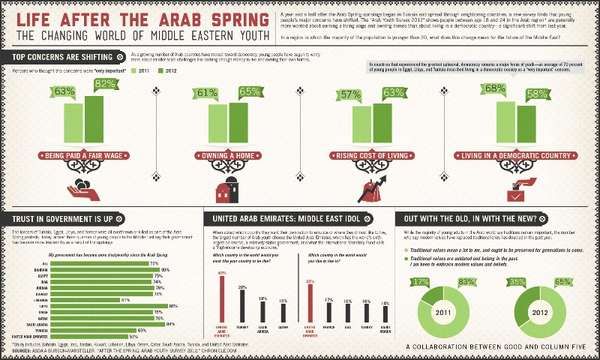 Sarah Nazim — June 18, 2012 — Pop Culture
References: twitter & good.is
Share on Facebook Share on Twitter Share on LinkedIn Share on Pinterest
After the monumental uprisings that swept the Middle East, the focus has been placed on the flourishing youth since they make up a large portion of the population in these countries. The survey results presented in this Infographic was taken by people aged 18 to 24 who are located in Bahrain, Iraq, Egypt, Kuwait, Jordan, Libya, Lebanon, Qatar, Oman, Tunisia, Saudi Arabia and the United Arab Emirates.

Compared to the 2011 data, this years results indicate that people’s views on modern values versus traditional ones have exponentially increased from 17% to 65%. Middle Eastern countries are often very culturally and religiously driven compared to Western countries, so these results are a clear indication of an emerging new generation who want a drastic shift from that of their parents.

Overall, the study indicates that the primary concern for youths living in these countries is the need for a better salary in order to be able to own a home and afford a decent living due to the rising cost of living.
1.6
Score
Popularity
Activity
Freshness
Attend Future Festival