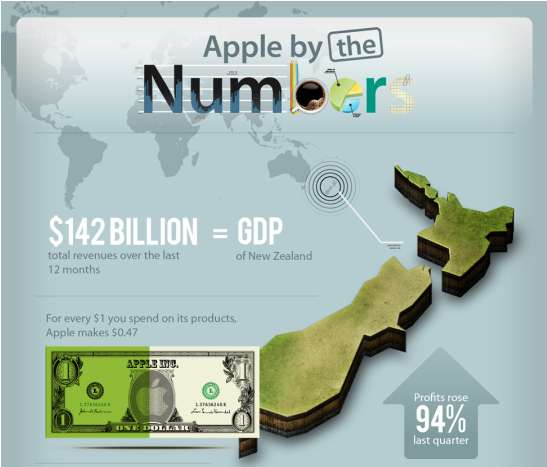 This Apple by The Numbers Chart Displays Apple's Growth

Behind world-changing devices like the iPod and iPhone as well as industry leading services like iTunes, Apple is truly one of a kind when it comes to innovation. This Apple By The Numbers infographic gives a 360 degree look at the company's incredible accomplishments.

Apple's last twleve months of revenue (142 billion dollars) is equal to the GDP of New Zealand. If that's not enough to drop your jaw, consider that Apple has 110.2 billion dollars in cash which means it could buy RIM, Nokia, Twitter, Adobe, Netflix and T-Mobile and still have money to spare!

In the last quarter, Apple's profits rose 94% which marks the 16th of the last 17 quarters that Apple has exceeded Wall Street's estimates.
3.6
Score
Popularity
Activity
Freshness
Get Trend Hunter Dashboard