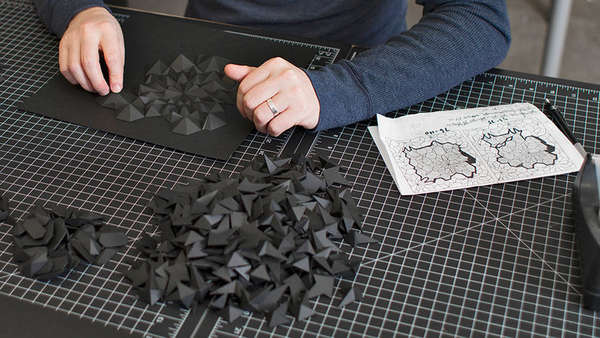 The Apophenia Series by Matthew Shlian is Darkly Arresting

Meghan Young — March 30, 2013 — Art & Design
References: theghostlystore & fastcocreate
The Apophenia Series is the latest and greatest from paper artist Matthew Shlian. A stunning lesson in geometry, or, more accurately, the impossibilities of geometry, each artwork in the Apophenia Series is created on a black canvas from which three dimensional shapes bulge off of. The term 'apophenia' refers to the idea of seeing patterns where none exist, which the artist believes he may be experiencing.

Multifaceted like a work of origami, the Apophenia Series is not completely chaotic as it appears, there is an underlying structure. Shlian writes, "This series was made using patterns, but specifically patterns that are dissected and subsequently reconstructed--it is neither an aperiodic nor an asymmetrical tile." He also reveals that he has never created something like the Apophenia Series before and looks forward to more experimentations.
6.8
Score
Popularity
Activity
Freshness