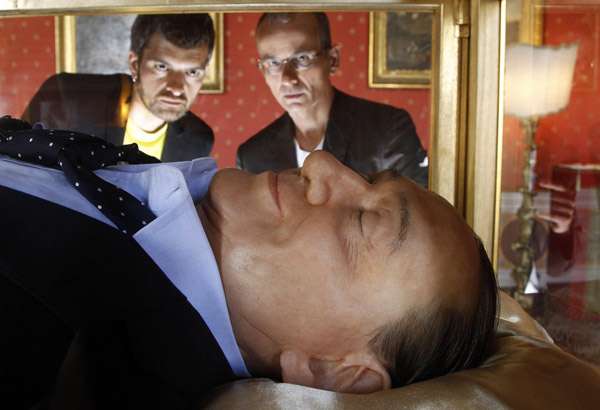 Romina S. Cortellucci — June 6, 2012 — Pop Culture
References: bloggokin.it & designyoutrust
Share on Facebook Share on Twitter Share on LinkedIn Share on Pinterest
Antonio Garullo and Mario Ottocento imagine 'The Italian Dream' as a dead Berlusconi. The Italian artists Antonio Garullo and Mario Ottocento who created this sculpture, were also one of the first gay couples to marry in Amsterdam back in 2002. The former Italian president and media tycoon Silvio Berlusconi has often found himself in the spotlight for his controversial statements.

The artists take Berlusconi's body, which is created out of silicone, to portray the former leader enclosed in a shrine. This is a tradition that is often seen in the Catholic faith for preservation of saints or powerful heroes. The sculpture however has Berlusconi wearing oversized slippers with one of his hands down his unzipped pants with the other on the History of Italy.

The artists named the piece 'Il sogno degli Italiani,' or what is translated as 'The Italian Dream,' in reference to one of the lines Berlusconi used to describe himself on a phone call with one of his girlfriends.

The sculpture is being exhibited at the Ferrajoli Palace in Rome, and is only a few steps away from the residence of the Italian Prime Minister, Palazzo Chigi.
3
Score
Popularity
Activity
Freshness
Get Better and Faster