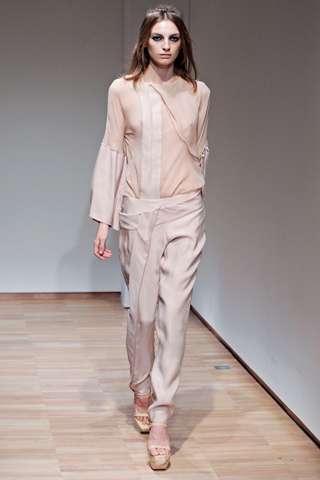 Souzan Michael — October 1, 2011 — Fashion
References: winnipegfreepress & style
Only a seasoned Parisian designer could make bedroom-inspired clothing look as chic as can be, which is exactly what the Anne Valerie Hash Spring 2012 show presents. The collection was soft and flowy, and silk was a prominent fabric, as one would expect from a sleepwear-influenced collection.

The Anne Valerie Hash Spring 2012 collection offered plenty of neutral, black and white pieces, but was also full of bright salmon and royal blue elements. A few pairs of printed silk, low-slung pants also made an appearance. Pajama pants are never as chic as they are in Paris.

Pencil skirts and slouchy pants are a huge defining factor in the Anne Valerie Hash Spring 2012 collection, meaning comfort is thankfully in store and in style this Spring. The best part of the collection? Light as air chiffon blouses held together using little more than a strap in the back.
5.3
Score
Popularity
Activity
Freshness