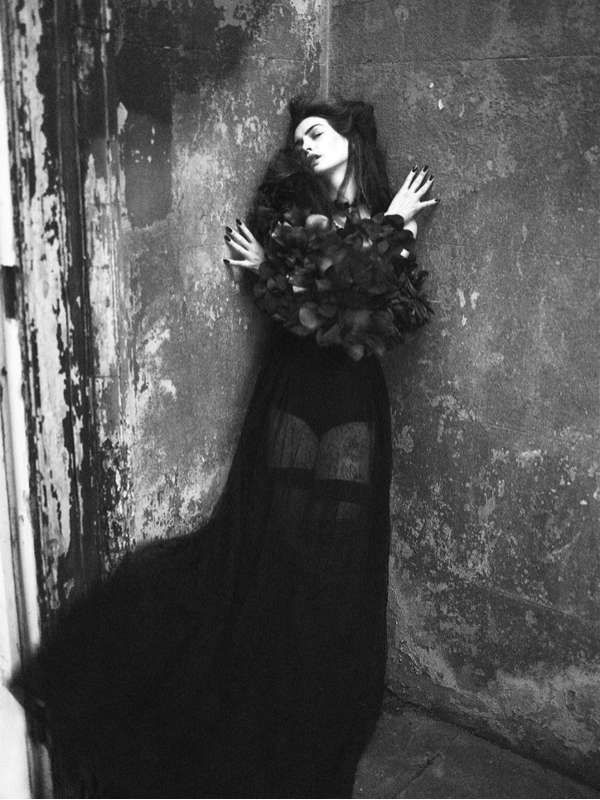 The Anne Hathaway Interview Magazine Spread Shows Her Dark Side

Corinne Guirgis — August 19, 2011 — Pop Culture
References: interviewmagazine & fashiongonerogue
Share on Facebook Share on Twitter Share on LinkedIn Share on Pinterest
Cross over to the dark side with this enchanting Anne Hathaway Interview Magazine editorial which defies the star's famous sunny personality and showcases her classic beauty. Lensed by creative duo Mert & Marcus, the shoot takes Hathaway from Princess Diaries to Princess Goth. The dramatic series is a testament to Hathaway's immense versatility and incredible talent, as she not only tells a passionate story, but conveys raw and soulful emotion every step of the way. With selections chosen by Karl Temper that include gowns from Nina Ricci, Gucci and Dolce & Gabbana, the shoot is both artistic and fashion-forward.

Hathaway also caught up with comedian and talk show host Chelsea Handler for an accompanying interview while vacationing in Italy, where she shared some of the troubles of maintaining a romantic relationship in the spotlight. The 28-year-old Oscar nom says, "I think that when actors are living very public lives, it affects your ability to get lost in the romance." Though the shoot begs to differ as readers get lost in Hathaway's undying passion, her wisdom and maturity shines through her words.

Implications - Consumers are fascinated with the private lives of celebrities and this fascination often overshadows the talents and accomplishments for which an icon became known. Celebs, magazines and media outlets capitalize on this obsession with exclusive interviews and photo shoots which give insight into their secret lives with which readers are so consumed.
5.7
Score
Popularity
Activity
Freshness
Get the 2023 Trend Report FREE