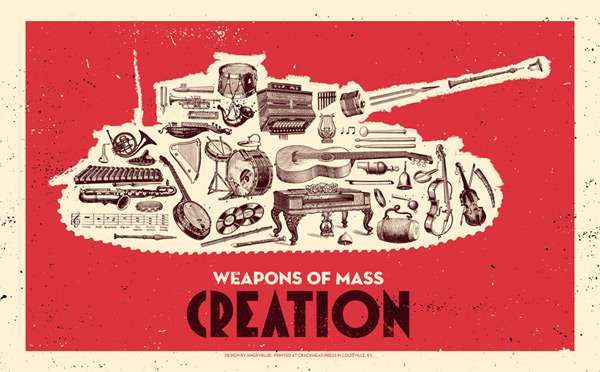 Weapons of Mass Creation by Angryblue is Creative and Peaceful

Ana Lopez — December 8, 2011 — Art & Design
References: angryblue & thisiscolossal
Share on Facebook Share on Twitter Share on LinkedIn Share on Pinterest
Posters that are playful and clever, like the ones created by artist Justin Kamerer also known as Angryblue, quickly catch the attention of audiences everywhere. The print series Weapons of Mass Creation touches upon two themes that often tend to collide against each other, which are art and war; however, Angryblue's art manages to connect them in a beautiful manner.

The collection consists of three different prints. One is a tank that holds musical instruments inside, the second is a grenade that contains cooking utensils, and the third is an air bomb filled with art tools. All three have a smart message at the bottom that reads 'Weapons of Mass Creation.'