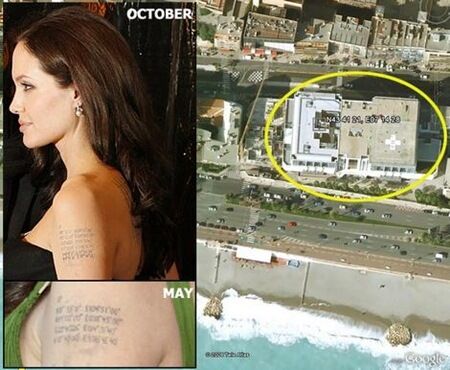 Pearl — October 12, 2008 — Celebs
References: smh.au
Share on Facebook Share on Twitter Share on LinkedIn Share on Pinterest
Angelina Jolie has been spotted with new tattoos that indicate her interest in technology as well as her sentimentality as a mother of six. During her first outing after giving birth to the twins, when she attended the New York Film Festival, her new arm embellishments boasts the details of the geographic location of the maternity hospital in Nice, France where she gave birth to the twins, Knox and Viviene, back in July.

The two new tattoo is on her left shoulder and reads N 43º 41’ 21” E 07º 14’ 28.” It is below the coordinates of the birth locations of her four other children. The video shows Angelina Jolie’s entire brood after the birth of the twins.

Angelina Jolie’s first natural-born daughter, Shiloh, has a birthplace represented by S 22º 40’ 26” E 14º 31’ 40” that is actually the Namibian beach resort of Swakopmund.