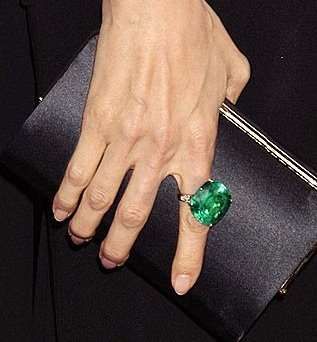 Before the Oscars, it was reported Angelina Jolie would be wearing a $20 million dollar necklace; well, the Academy Awards came and went, and while no such necklace appeared around her dainty neck, her killer green ring (65 carat Colombian emerald from Lorraine Schwartz) captivated jewelry lovers the world over. A necklace would have been overkill. Her venomous green emerald earrings, also by Lorraine Schwartz, were the perfect compliment to the ring worn on her right index finger, which sparkled beautifully against the stark contrast of her black Elie Saab gown.

In watching footage of Angelina at the 2009 Oscars, it’s clear she made an effort to flash her big green ring in the direction of the cameras as much as possible; and why not? Statement jewelry is meant to have a powerful presence, is it not?