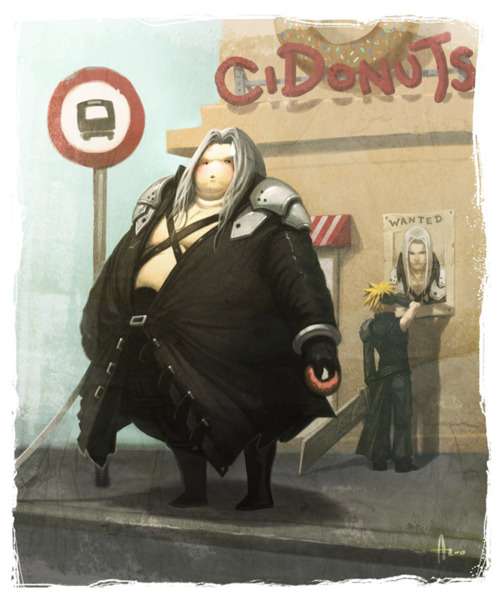 Andrew Hou is a Master of Illustrating Awesome Exaggerated Anatomy

Jason Soy — November 18, 2011 — Pop Culture
References: njoo.deviantart & brok-lee.tumblr
Share on Facebook Share on Twitter Share on LinkedIn Share on Pinterest
It doesn't take much to make me laugh, and the title image of this Andrew Hou gallery, entitled 'Final Fat-assy,' put a giant grin on my face. With his clever play on the word "fantasy," as well as his illustration of the intimidating video game character Sephiroth as an excessively girthy donut-eater sporting a priceless look on his face, it was practically destiny that I became a fan of this South Korean artist's work.

Humorous illustrations aside, Andrew Hou is one seriously talented man. He currently works as a concept artist of sorts for UDON Entertainment and is a master at imagining characters with exaggerated and often awesome anatomical parts. Whether it's a gigantic pair of robotic arms or a plump round child, Andrew Hou definitely articulates the creative ideas in his mind onto a computer screen with extreme ease.
1.8
Score
Popularity
Activity
Freshness
View Innovation Webinars