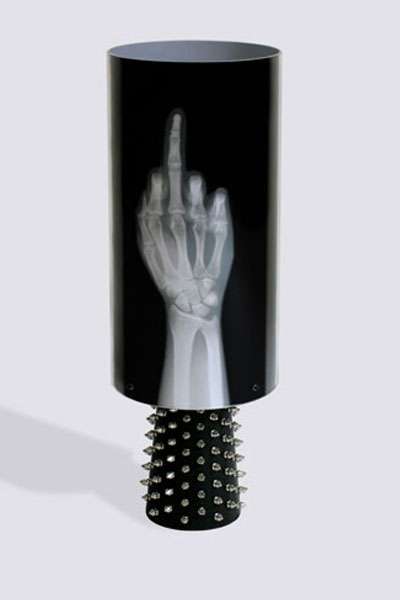 Andrea Maestri Fashions a Lamp that Flips Off Its Users

Jason Soy — May 9, 2012 — Art & Design
References: maestriland & whokilledbambi
Share on Facebook Share on Twitter Share on LinkedIn Share on Pinterest
If you’re not accustomed to being given the middle finger, you will once you get your hands on one of these Andrea Maestri lamps. The funky illuminator is already noteworthy because of its x-ray lampshade, but the most attention-grabbing aspect of the light is its silhouette of a hand flipping someone off. Yes, it’s crude, but it makes up for that by being doubly creative. The shade even rests on a studded stand resembling a punk rock arm brace to complete the rebellious look.

Andrea Maestri named this furniture piece ‘Fuck you!’ It’s made from aluminum, leather, studs, polycarbonate and plexiglass. One has to wonder if this eccentric illuminator is too distracting to be a viable light source in a household. Still, there’s no denying its sheer badassery.

Pinched Glass Lighting
The Press Lamp by NENDO is Soft, Subtle and Minimalist