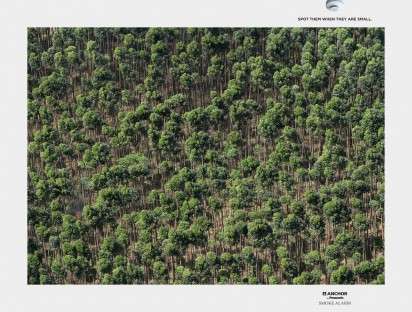 Meghan Young — February 7, 2013 — Marketing
References: scarecrow.asia & ibelieveinadv
Share on Facebook Share on Twitter Share on LinkedIn Share on Pinterest
The Anchor by Panasonic Smoke Alarm ad campaign likens a house fire to a forest fire. With breathtaking aerial shots of vast forests, it is easy to overlook the small fire present in each of them. It can be just as hard to detect a starter fire in the home as well. But with the help of this smoke alarm, people will be able to "stop them when they are small," as stated in the tag line.

Conceived and executed by Scarecrow Communications, an ad agency based in Mumbai, India, the Anchor by Panasonic Smoke Alarm ad campaign was art directed by Kapil Tammal and Ankit Dembla with creative direction by Raghu Bhat, Manish Bhatt, Kapil Tammal and Sarvesh Raikar. It's almost like a game of 'Where's Waldo?'
1.7
Score
Popularity
Activity
Freshness
Get Better and Faster