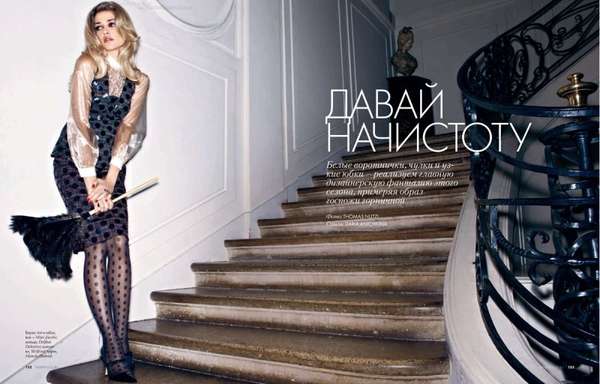 The Ana Beatriz Barros ELLE Russia is Glamorous and Sensual

Meghan Young — December 4, 2011 — Fashion
References: elle.ru & fashiongonerogue
Living a lavish lifestyle has its ups and downs just like any other as the Ana Beatriz Barros ELLE Russia editorial depicts. Despite the decadent surroundings and stunning ensembles, it is clear that this heiress is bored. From languidly lounging around the estate to participating in some risque behavior, she is portrayed as simply trying to fill her time while looking fabulous.

Lensed by photographer Thomas Nutzl, the Ana Beatriz Barros ELLE Russia editorial is part of the magazine's December 2011 issue. Beatriz even graces the cover as well. Fashion editor Daria Anichkina styled the photo shoot, going with glamorous and sensual pieces from such designers as Louis Vuitton, Valentino, Lanvin and Miu Miu. The sultry looks are complete with hair by Mark Daniel Bailey and makeup by Topolino.
6.8
Score
Popularity
Activity
Freshness